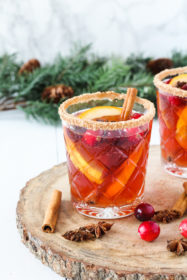 Filled with warming flavours of cinnamon and star anise, this winter punch has everything you’d want in a holiday cocktail,

You can make your pomegranate simple syrup ahead of time and chill until using. Feel free to add a sprig of rosemary for a festive holiday touch! You can also add a few ice cubes if you prefer your drink extra cold.