And this Potato Leek Soup is here to give you all of the cozy vibes you need.

Simple to make with just a few key ingredients, you’ll be making this soup all Fall and Winter long. Leeks pack a ton of flavour, especially when you sauté them in butter first! And that is the base for this dreamy, creamy soup.

Where does the creaminess of the soup come from? The potatoes soften when cooked in the broth and combined with the yogurt as you blend the soup, make for the ultimate creamy comforting spoonful.

Leeks: Sautéed leeks in butter is the best base of flavour for this soup.

Celery: Adds to the base of flavour of this soup when cooked with the leeks.

Potatoes: The main star of the show! Both yellow or white potatoes (yukon gold or russet potatoes) work well in this soup and combine with leeks for the most divine soup experience.

Spices: A simple combination of minced garlic, dried thyme, salt and pepper is all you need.

Broth: Use chicken or vegetable broth in this recipe. Or, see below for my recommendations on how to make this soup vegetarian or vegan.

Greek Yogurt: Many potato leek soups use cream so I used greek yogurt to lighten things up just a bit but keep the creaminess. It also adds a ton to the flavour of the soup!

And let’s just discuss the topping! Just a quick broil of pancetta and leek tops make for the most delicious topping to this soup. Adds just a punch of saltiness and honestly a spoonful of soup along with the topping is kind of like a tasty baked potato!

Simple, creamy and delicious, this Potato Leek Soup is made for cooler weather. Each spoonful is a delightful treat of flavour!

A quick note when you go to reheat the soup, since it's quite thick add a splash of broth or water and then reheat on medium-low.

How to make this soup vegetarian or vegan

I love to make this soup on Friday so we have delicious lunches for the weekend.

How long does potato leek soup last in the fridge?

Want to make this soup and enjoy it for a few days? You can! This potato leek soup is good kept in the fridge for 3-5 days. Plus, you can even freeze it for up to 2 months. A quick note when you go to reheat the soup, since it’s quite thick add a splash of broth or water and then reheat on medium-low.

If you want to make this for a light lunch, try pairing with an easy green salad. Or, go the decadent route with a grilled cheese sandwich. This potato leek soup is also delicious on it’s own; perhaps with a piece of fresh, buttered bread on the side.

Do you love soup as much as I do this time of year? Try my Roasted Cauliflower Soup or classic Roasted Tomato Soup. 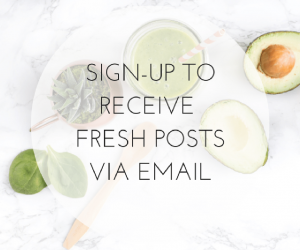 I can’t think of anything better to bake this we

Can't think of a better way to celebrate Mother's

It's almost the weekend so let's cheers with this

Definitely diving into a stack of these Oatmeal Bl

Currently dreaming up allll of the fresh veggies &

I can't think of anything better than one of these

Baking a batch of these Easy Herb Drop Biscuits fo